The Aborigines of Australia were the first people to set foot on the continent, somewhere between 40,000 and 60,000 years ago. It is believed that they originally came from Southeast Asia, entering the continent from the north. Modern Australia, including Tasmania, was then one continent with what is now New Guinea. Once the seas rose and covered the land that connected the continents, the Aborigines were isolated for thousands of years. They lived in small groups all over Australia and each group had its own languages. Until now, nearly 230 aboriginal languages had been identified, with a large number of dialects in each language. Before colonization began in January 1788, their lifestyle and cultural practices had remained largely unchanged over thousands of years.

Traditionally, the aborigines were hunters and food gatherers. Spears, throwing clubs, and boomerangs were their chief hunting weapons. They did not plant crops, and their only domesticated animal was the dingo (a dog found only in Australia). Most aborigines wore nothing except ornaments; a few tribes used kangaroo skins as cloaks in cold weather. Metals were unknown. However, the social organization, marriage rules, taboos, and religious ceremonies of the aborigines were intricate and well developed.

The Aborigines' creation story describes their arrival in terms of the Dreamtime, the beginning of time, when the spirits created the world. During Dreamtime, spirits rose from below the Earth and transformed into all the natural elements you see in Australia today -- rivers, lakes, mountains, hills and caves. The spirits literally make up the land. However, the Aborigines believe that these spirits are alive within the land of Australia. Because of this, Aborigines view the land as sacred and treat it as such.

White immigrants had come to build a new life for themselves and their families. Most of them were not interested in the affects colonization brought on the Aborigines who were often treated like a pest and a nuisance. Many were killed by diseases brought in by these new immigrants. Thousands were massacred to make way for farms and settlements. Their food sources were also destroyed. Some Aboriginal people adapted to the laws and the new lifestyle of the white people. In doing so, many were reduced to pauperism and became beggars. Others broke the traditional tribal lore by moving into the traditional lands of other tribes. In many cases, they had no option in doing this as they were facing either starvation or the gun. Today, some aborigines still maintain a somewhat traditional lifestyle but most have settled in urban areas or practice farming or ranching.

For many years the Australian government kept the aborigines on government reserves. During the 1930's aborigine leaders began organizing their people to seek equal rights with whites. In the decades that followed aborigines gradually gained more rights, and in 1967 they won the right to vote. Since then, aborigine leaders have sought the rights to their ancestral lands and the government has returned some lands to them. There are about 410,000 aborigines of full blood or mixed ancestry. 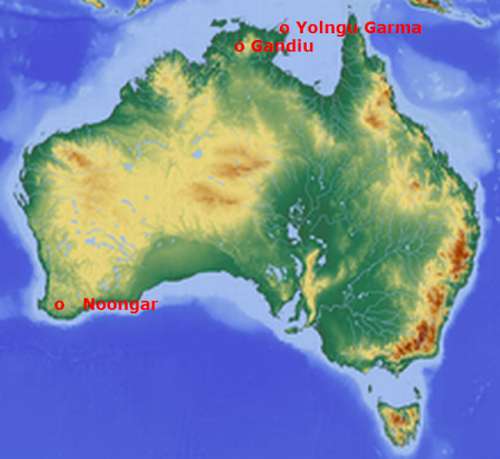